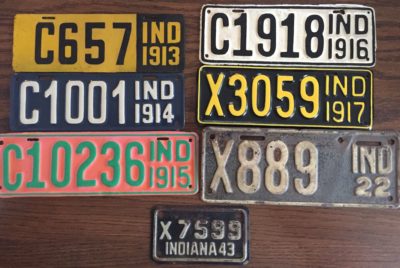 The 1st year of a State Issued Plate was 1913 and this year is the only year Porcelain Plates were issued by Indiana.

The letter “C” was used for MotorCycle Plates beginning in 1913 and then thru 1916 as seen in this image.

Beginning in 1916 Letters were used on Car Plates also, and yes the letter “C” was in the car numbering scheme. Now this could be confusing when someone had plate C1918. Was it the Car Plate or Motorcycle Plate?

So in 1917 the Letter “X” took over as the designation for Motorcycles and was used until 1950.

In these early years as seen in the image, various sizes of plates were manufactured. The 1943 plate is about the size of a Credit Card.