In My Personal Collection is the ONLY Full Size Stamped Indiana Plate with the Number One Million.

It was made for the Secretary of State James Tucker.

Documented in old Newspaper Clipping, as the story goes, Tucker was aggravated by Indiana Residents bugging and demanding their local License Branches to get them certain Low numbers on their plates, which 2, 3 and 4 digit plates were stamped up to 1941. Many were desired numbers seen in Poker Hands such a 711. Some asked for their House Address Numbers. Birthdays were another popular request.

Tucker decided that in 1942 the numbers were going to start at 10,001 and that would take care of the issue. He set aside the  #10,001 pair of plates for his Father. With the continual growth of Auto Registrations along with this decision, the number of registered Cars would go over 1,000,000 for the very first time in Indiana. 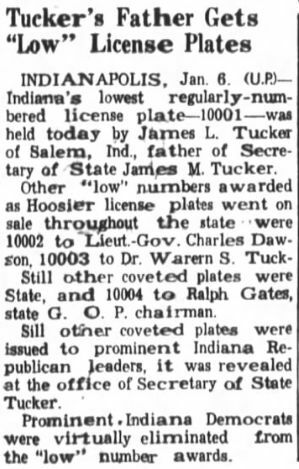 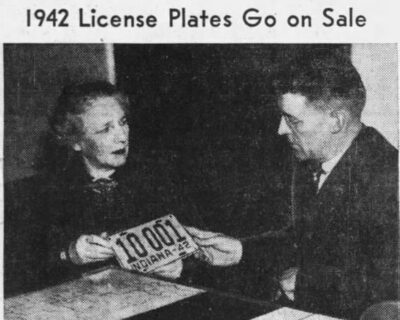 Although pairs of plates were stamped, there is no proof that a pair of the One Million Number was produced. This plate came to me with a small hand painted tag saying Only One Made, courtesy Jim Tucker, While Sec. of State. 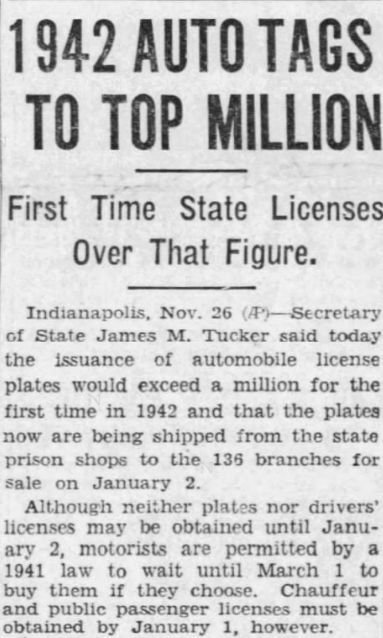 James Mitchell Tucker was born on April 21, 1908, in Salem, Indiana. He graduated from Indiana University with an A.B. in 1930 and an LL.B. in 1932. Tucker practiced law in Salem from 1932 to 1938. From 1935 to 1938, he was also the attorney for Orange County. He was active in the Young Republicans of Indiana. At the time he was elected Indiana Secretary of State in 1939, he was the youngest Secretary of State ever elected in the United States. He served as Secretary until July 25, 1942 when he entered the U.S. Navy with the rank of Lieutenant. During World War II, Tucker fought in Italy until receiving a medical discharge on February 22, 1944. He reestablished a law practice in Paoli, Indiana, when he returned home. Tucker died on September 22, 1995. (source: wikipedia)